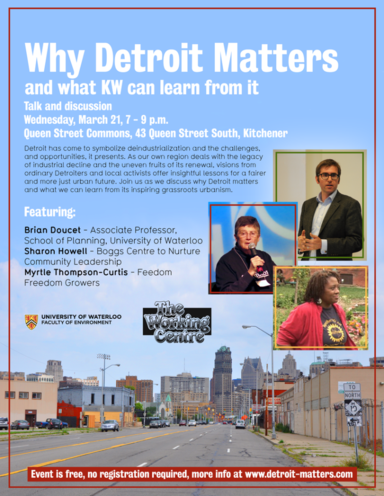 Section I: Lessons from Detroit

2. Detroit’s Bankruptcy: Treating the Symptom, Not the Cause
George Galster
3. Detroit in Bankruptcy: What are the Lessons to be Learned?
Reynolds Farley
4. Between Economic Revival and Social Disruption: The Redevelopment of Greater Downtown and the emergence of new socio-spatial Inequalities
René Kreichauf
5. A New Urban Medicine Show: On the limits of blight remediation
Joshua Akers
6. Reshaping the Gray Spaces: Resident self-provisioning and urban form in Detroit
Kimberley Kinder
7. Preserving Detroit by Preserving Its Baseball History
Jason Roche
8. This is (not) Detroit – Projecting the Future of Germany’s Ruhr Region
Julia Sattler

Intermezzo I: ‘You may not know my Detroit’ jessica Care moore

26. Conclusion: Detroit and the future of the city
Brian Doucet

Useful, interesting and inspiring websites on Detroit
Detroit Publications and Past Events 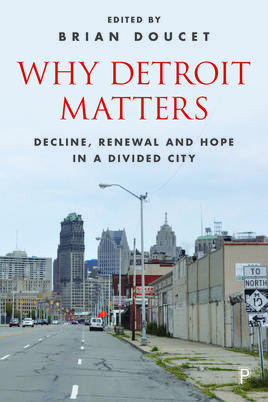 Want to know more about Detroit? Click on one of the links below

Why Detroit Matters: Decline, renewal and hope in a divided city

Detroit has come to symbolise deindustrialization and the challenges, and opportunities, it presents. As many cities struggle with urban decline, racial and ethnic tensions and the consequences of neoliberal governance and political fragmentation, Detroit’s relevance grows stronger. Why Detroit matters bridges academic and non-academic responses to this extreme example of a fractured and divided, post-industrial city.

Contributions from many of the leading scholars on Detroit are joined by influential writers, planners, artists and activists who have contributed chapters drawing on their experiences and ideas. The book concludes with interviews with some of the city’s most prominent visionaries who are engaged in inspiring practices which provide powerful lessons for Detroit and other cities around the world.

The book will be a valuable reference for scholars, practitioners and students from across disciplines including geography, planning, architecture, sociology, urban studies, history, American studies and economics.